Abby has had her new eye-gaze system for a few months now.  It allows her to control the computer with her eyes, much like the click of a mouse.  She can look at a word, symbol, or picture, and the computer “speaks” the word(s).

Eye-tracking technology has been around for a few years, but it’s now much more user friendly.  Abby’s computer system was created by Tobii.  The system includes a camera with near-infrared illumination which creates reflections on the eyes to track their gaze. 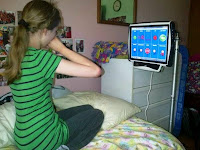 Abby uses her computer to communicate needs, as we expected.  She often chooses, "I'm hungry," which takes her to several food choices.  Someone suggested to me that we should remove the choices for foods we don't have.  I disagreed.  People often talk about what they'd like to eat, regardless of whether it's available.

In the past, when Abby was having some kind of pain or medical distress, we did not have any way to pin point the problem.  Now, she will often use her computer to say, "I am sad." or "Something is wrong." These choices take her to pages with more specific information about what might be wrong. We continue to add choices as we figure out what she might be trying to say.  A few days ago, Abby was very upset and crying and we couldn't figure out what was wrong.  She refused to use the computer (likely because she knew the word wasn't on there).  Then, she let out a huge burp, followed by a smile.  Needless to say, we now have "I need to burp" as one of her choices on her computer.

When Abby is feeling well and not too hungry, she will use the computer for social conversation.  She loves to say "Hi" to people.  She likes to talk about what has happened, using "Guess what I did?"  She often tells me, "I'm bored," which takes her to a page where she chooses, "I want to go outside" or "Can I please go for a stroller ride?"

Abby goes for long periods of time without choosing to use the computer.  She is more likely to use it when she is alone in her room than when someone in watching her and waiting for her to "perform."  She still relies on nonverbal communication because that's what comes naturally to her.  Today, we had a new personal support worker in the home and Abby became quite chatty with her on the computer.  I'm guessing that's because the new person had no experience with communicating with Abby any other way. 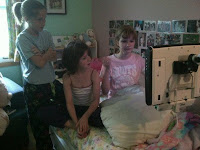 Sometimes, Abby's computer communication will come with bursts of excitement.  One day, she was eating supper and spent most of the meal telling me about how hungry she was and choosing all the foods she wanted.  Then, near the end of the meal, she chose a bunch of different buttons, in quick succession.  It went something like this: "Hi, Mom. Awesome. Thanks. I love you."

Another time, we had several guests around the table for dinner and the conversation became quite noisy.  We are used to Abby quietly sitting by, listening.  But when Abby's grandma began to tell a new story, Abby interrupted by saying, "I don't like that noise."  We all burst out laughing.  Then, Abby laughed because we were all laughing.

Besides the incredible technology itself, the most surprising thing to me is the direction Abby's conversation takes.  Even though I am convinced Abby understands everything and thinks like the rest of us, I'm still surprised when she expresses thoughts beyond her basic needs.  One day, we were coming home from a walk and Abby was quite distressed.  As I brought her into her room and started up her computer, I commented quite a bit about how she was going to be able to tell me what was wrong and I was going to try to help her.  Once she got settled in front of the computer, I expected her to go directly to "Something is wrong" and then tell me what hurt.  Instead, her first words to me were, "Thank you."

HI Abby, I#m the mom of Vanessa and we live in Austria, Europe. Vanessa is like you 14 years old and communicationg with her Tobii for almost a yeqr now. She definately loves music. The music page is the most important one, and her sisters do not really agree with her music interests. Nevertheless she chooses it endlessly.
I'd love to stay in contact with you, as in Austria I only know three girls using a Tobii and they are much younger. Your mom can writ me if she likes on stella.peckary@rett-syndrom.at
best wishes!!! good girl!!

What is Rett Syndrome?

Thank you for all the support!